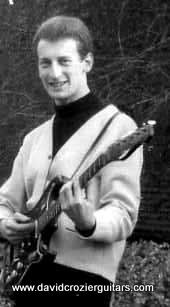 I am going to own up to some of my guitar 'career' as an introduction to David Crozier Guitars mobile luthiery service, so here goes.

I began my guitar playing 'career' with a red Watkins Rapier 22 in 1960. I remember stripping the paint off the back of the neck so that it looked a bit more like Hank Marvin's Fender Stratocaster. Come on, you know you did it, too!

I then moved on to a sunburst Burns Split Sound Jazz guitar (see picture of me aged 16, above!) because the body shape and sunburst finish looked like Buddy Holly's Stratocaster. I joined a' beat group' called The Playboys which was then renamed The Outsiders. It was the mid sixties by now and we had a superb time playing the usual haunts and believing we were rock gods! Towards the end of my time with this band, I achieved a burning ambition and managed to buy a beaten up second hand Fender Stratocaster in sunburst. Heaven for a Buddy Holly fan! To this day I can recall what that Strat sounded like through my Vox AC15 Twin amp. There is no other electric guitar sound like it. I reckon that guitar was a 1959 example and I sold it two years later for £24 when I was a penniless student...groan.

Being a student in London in the sixties meant music was all around me and I rapidly caught on to the folk music boom of that time. I discovered acoustic guitars! My first was a Harmony Sovereign and that guitar served me well throughout the initial period of my folk music years playing with The Weevils, Doug 'n' Dave and The Skerries.

Then, in 1975, I managed to obtain my dream acoustic guitar, a CF Martin OOO-18. I 'went solo' with this guitar and enjoyed an active and very pleasurable time in folk clubs, and occasionally on the radio, throughout the 1970s.

The fiery passion for quality guitars was now ablaze and I slowly became a collector as well as a player without realising it was happening! Lovely acoustic guitars sat alongside lovely electric guitars for many years. I still use both to play in public.

Via various bands, including The Travelling Band, Way Out West, DC & The Topcats and Louisiana Lightning, I have now arrived at the position where I still play and sing and I have no intention of stopping!

Sixteen years ago, I set-up my first guitar shop dealing in high-end and vintage guitars. All my guitar-loving life, I have been adjusting and repairing my own guitars. Many years ago, I received luthiery training from renowned luthiers Vince Hockey and David Whiteman. I now offer everyone repairs, restorations, upgrades and sales through my bespoke mobile luthiery service David Crozier Guitars (Mobile Luthiery). I also offer set-up instruction courses with David Whiteman through White Crow Guitarworks.